The tournament was played between January 10, and January 12, 1910, in Les Avants, near Montreux, Switzerland, and it was won by Great Britain.

The Oxford Canadians, a team made up of Canadian students from Oxford University, also participated in the tournament. However, their games did not count towards the final standings of the tournament. Great Britain refused to play the Canadians, so they only took part in three games against Switzerland, Belgium, and Germany, winning all of them handily.

France and Bohemia were initially slated to participate in the tournament. The former withdrew to protest the playing format, while the latter declined to play due to insufficient training. 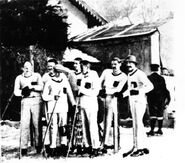 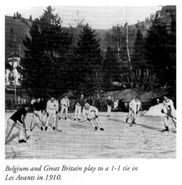 A photo from the Belgium-Great Britain match.

A photo from the Germany-Switzerland match. Note Oscar Auckenthaler in the foreground to the right.